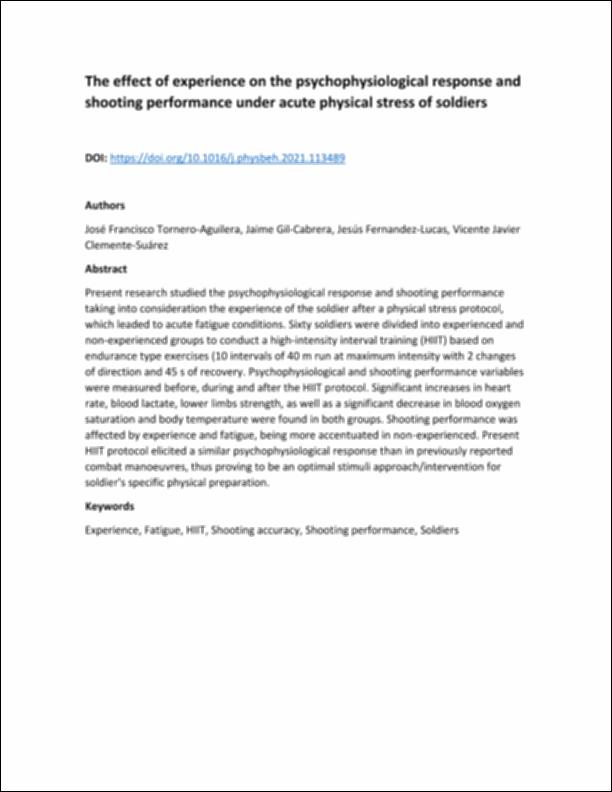 The effect of experience on the psychophysiological response and shooting performance under acute physical stress of soldiers.pdf (101.5Kb)
Author

Present research studied the psychophysiological response and shooting performance taking into consideration the experience of the soldier after a physical stress protocol, which leaded to acute fatigue conditions. Sixty soldiers were divided into experienced and non-experienced groups to conduct a high-intensity interval training (HIIT) based on endurance type exercises (10 intervals of 40 m run at maximum intensity with 2 changes of direction and 45 s of recovery. Psychophysiological and shooting performance variables were measured before, during and after the HIIT protocol. Significant increases in heart rate, blood lactate, lower limbs strength, as well as a significant decrease in blood oxygen saturation and body temperature were found in both groups. Shooting performance was affected by experience and fatigue, being more accentuated in non-experienced. Present HIIT protocol elicited a similar psychophysiological response than in previously reported combat manoeuvres, thus proving to be an optimal stimuli approach/intervention for soldier's specific physical preparation.
Collections