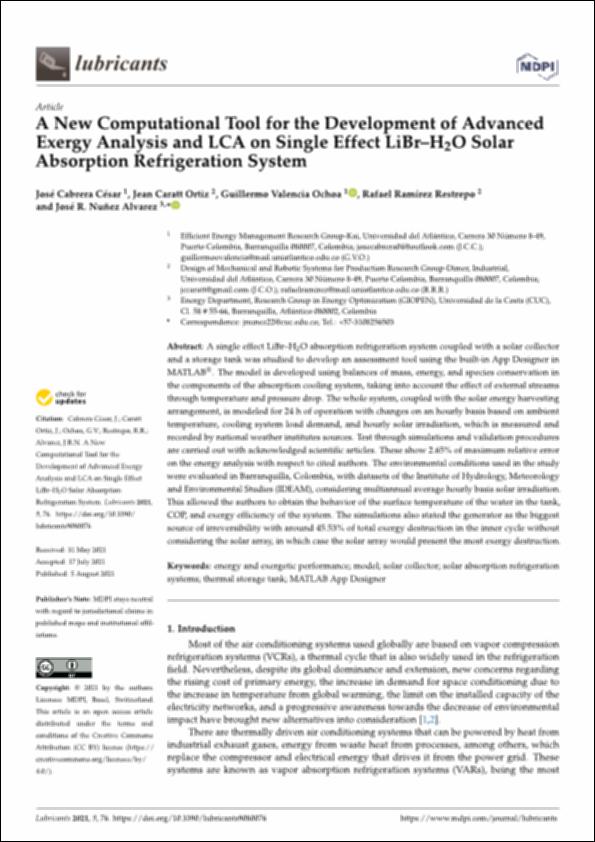 A single effect LiBr–H2O absorption refrigeration system coupled with a solar collector and a storage tank was studied to develop an assessment tool using the built-in App Designer in MATLAB®. The model is developed using balances of mass, energy, and species conservation in the components of the absorption cooling system, taking into account the effect of external streams through temperature and pressure drop. The whole system, coupled with the solar energy harvesting arrangement, is modeled for 24 h of operation with changes on an hourly basis based on ambient temperature, cooling system load demand, and hourly solar irradiation, which is measured and recorded by national weather institutes sources. Test through simulations and validation procedures are carried out with acknowledged scientific articles. These show 2.65% of maximum relative error on the energy analysis with respect to cited authors. The environmental conditions used in the study were evaluated in Barranquilla, Colombia, with datasets of the Institute of Hydrology, Meteorology and Environmental Studies (IDEAM), considering multiannual average hourly basis solar irradiation. This allowed the authors to obtain the behavior of the surface temperature of the water in the tank, COP, and exergy efficiency of the system. The simulations also stated the generator as the biggest source of irreversibility with around 45.53% of total exergy destruction in the inner cycle without considering the solar array, in which case the solar array would present the most exergy destruction.
Collections