Personal and environmental predictors of aggression in adolescence 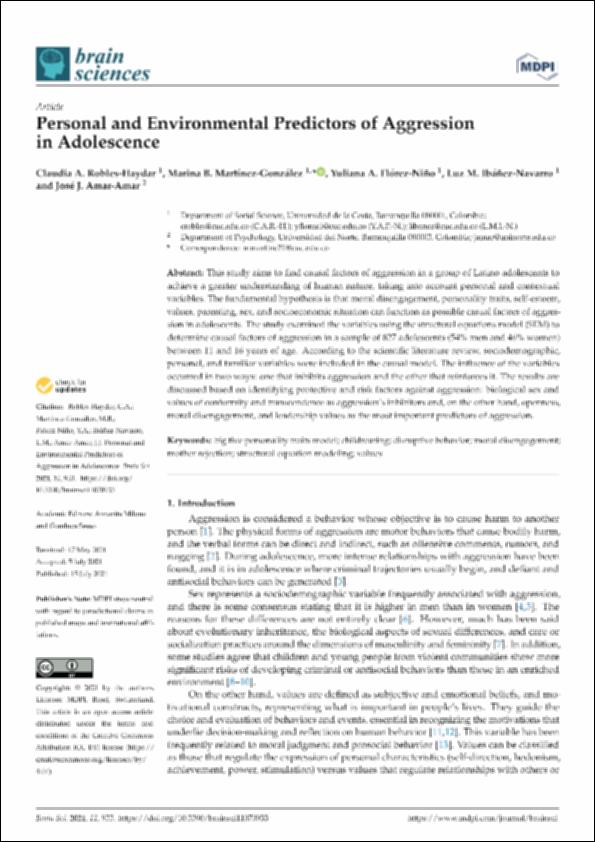 This study aims to find causal factors of aggression in a group of Latino adolescents to achieve a greater understanding of human nature, taking into account personal and contextual variables. The fundamental hypothesis is that moral disengagement, personality traits, self-esteem, values, parenting, sex, and socioeconomic situation can function as possible casual factors of aggression in adolescents. The study examined the variables using the structural equations model (SEM) to determine causal factors of aggression in a sample of 827 adolescents (54% men and 46% women) between 11 and 16 years of age. According to the scientific literature review, sociodemographic, personal, and familiar variables were included in the causal model. The influence of the variables occurred in two ways: one that inhibits aggression and the other that reinforces it. The results are discussed based on identifying protective and risk factors against aggression: biological sex and values of conformity and transcendence as aggression's inhibitors and, on the other hand, openness, moral disengagement, and leadership values as the most important predictors of aggression.
Collections