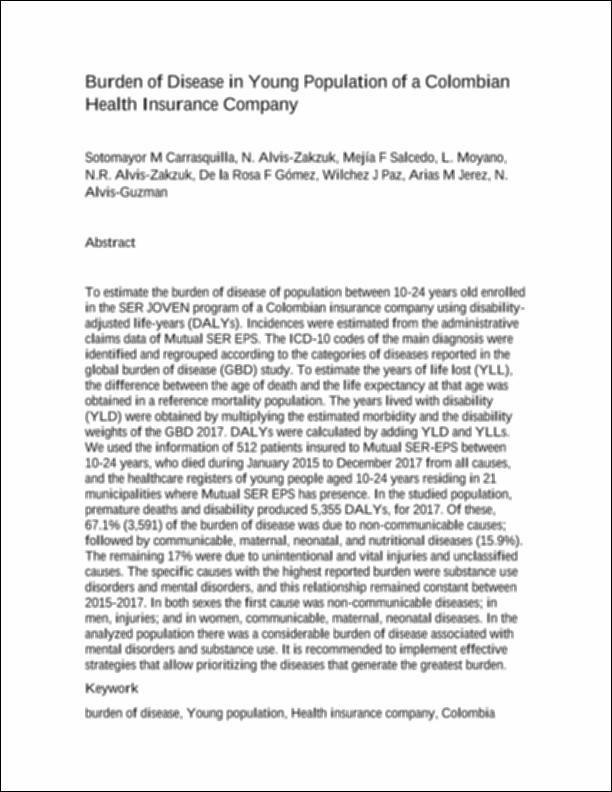 To estimate the burden of disease of population between 10-24 years old enrolled in the SER JOVEN program of a Colombian insurance company using disability-adjusted life-years (DALYs). Incidences were estimated from the administrative claims data of Mutual SER EPS. The ICD-10 codes of the main diagnosis were identified and regrouped according to the categories of diseases reported in the global burden of disease (GBD) study. To estimate the years of life lost (YLL), the difference between the age of death and the life expectancy at that age was obtained in a reference mortality population. The years lived with disability (YLD) were obtained by multiplying the estimated morbidity and the disability weights of the GBD 2017. DALYs were calculated by adding YLD and YLLs. We used the information of 512 patients insured to Mutual SER-EPS between 10-24 years, who died during January 2015 to December 2017 from all causes, and the healthcare registers of young people aged 10-24 years residing in 21 municipalities where Mutual SER EPS has presence. In the studied population, premature deaths and disability produced 5,355 DALYs, for 2017. Of these, 67.1% (3,591) of the burden of disease was due to non-communicable causes; followed by communicable, maternal, neonatal, and nutritional diseases (15.9%). The remaining 17% were due to unintentional and vital injuries and unclassified causes. The specific causes with the highest reported burden were substance use disorders and mental disorders, and this relationship remained constant between 2015-2017. In both sexes the first cause was non-communicable diseases; in men, injuries; and in women, communicable, maternal, neonatal diseases. In the analyzed population there was a considerable burden of disease associated with mental disorders and substance use. It is recommended to implement effective strategies that allow prioritizing the diseases that generate the greatest burden.
Collections