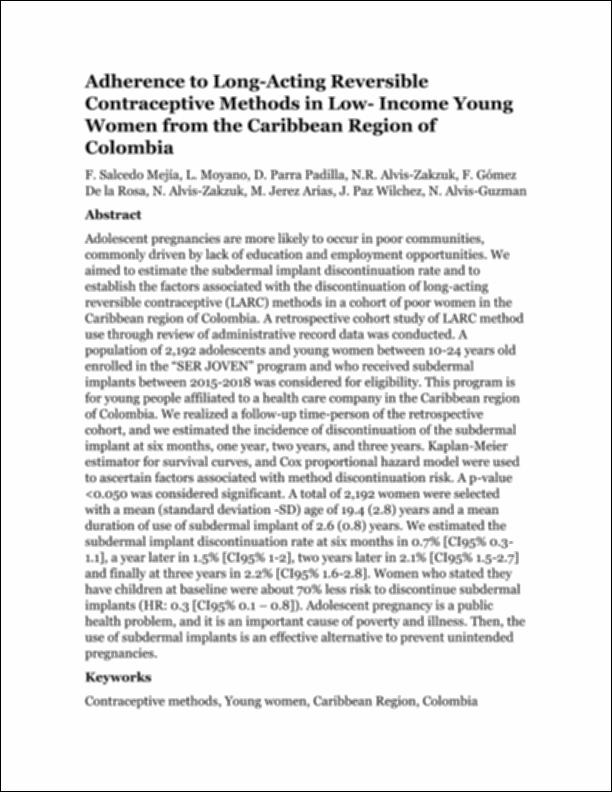 Adolescent pregnancies are more likely to occur in poor communities, commonly driven by lack of education and employment opportunities. We aimed to estimate the subdermal implant discontinuation rate and to establish the factors associated with the discontinuation of long-acting reversible contraceptive (LARC) methods in a cohort of poor women in the Caribbean region of Colombia. A retrospective cohort study of LARC method use through review of administrative record data was conducted. A population of 2,192 adolescents and young women between 10-24 years old enrolled in the “SER JOVEN” program and who received subdermal implants between 2015-2018 was considered for eligibility. This program is for young people affiliated to a health care company in the Caribbean region of Colombia. We realized a follow-up time-person of the retrospective cohort, and we estimated the incidence of discontinuation of the subdermal implant at six months, one year, two years, and three years. Kaplan-Meier estimator for survival curves, and Cox proportional hazard model were used to ascertain factors associated with method discontinuation risk. A p-value <0.050 was considered significant. A total of 2,192 women were selected with a mean (standard deviation -SD) age of 19.4 (2.8) years and a mean duration of use of subdermal implant of 2.6 (0.8) years. We estimated the subdermal implant discontinuation rate at six months in 0.7% [CI95% 0.3-1.1], a year later in 1.5% [CI95% 1-2], two years later in 2.1% [CI95% 1.5-2.7] and finally at three years in 2.2% [CI95% 1.6-2.8]. Women who stated they have children at baseline were about 70% less risk to discontinue subdermal implants (HR: 0.3 [CI95% 0.1 – 0.8]). Adolescent pregnancy is a public health problem, and it is an important cause of poverty and illness. Then, the use of subdermal implants is an effective alternative to prevent unintended pregnancies.
Collections