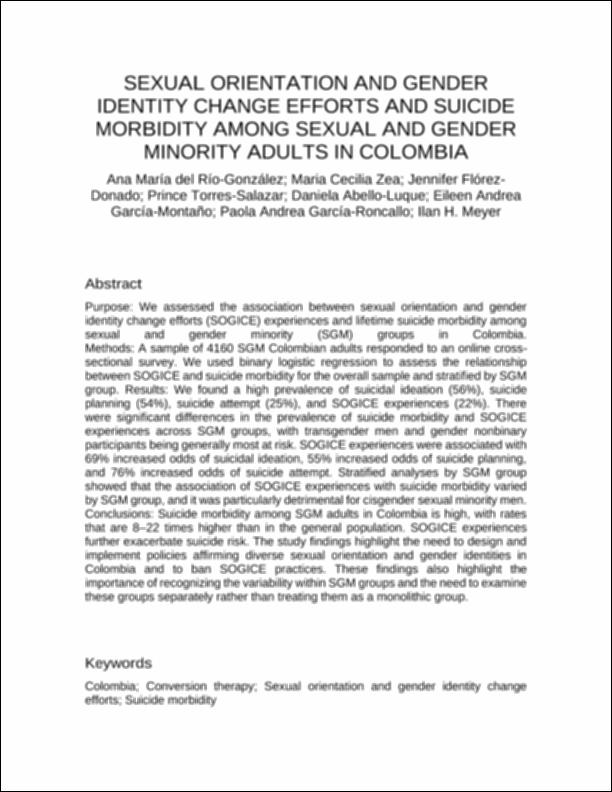 Purpose: We assessed the association between sexual orientation and gender identity change efforts (SOGICE) experiences and lifetime suicide morbidity among sexual and gender minority (SGM) groups in Colombia. Methods: A sample of 4160 SGM Colombian adults responded to an online cross-sectional survey. We used binary logistic regression to assess the relationship between SOGICE and suicide morbidity for the overall sample and stratified by SGM group. Results: We found a high prevalence of suicidal ideation (56%), suicide planning (54%), suicide attempt (25%), and SOGICE experiences (22%). There were significant differences in the prevalence of suicide morbidity and SOGICE experiences across SGM groups, with transgender men and gender nonbinary participants being generally most at risk. SOGICE experiences were associated with 69% increased odds of suicidal ideation, 55% increased odds of suicide planning, and 76% increased odds of suicide attempt. Stratified analyses by SGM group showed that the association of SOGICE experiences with suicide morbidity varied by SGM group, and it was particularly detrimental for cisgender sexual minority men. Conclusions: Suicide morbidity among SGM adults in Colombia is high, with rates that are 8–22 times higher than in the general population. SOGICE experiences further exacerbate suicide risk. The study findings highlight the need to design and implement policies affirming diverse sexual orientation and gender identities in Colombia and to ban SOGICE practices. These findings also highlight the importance of recognizing the variability within SGM groups and the need to examine these groups separately rather than treating them as a monolithic group
Collections