Recognition of diseases and use of herbal in Latin America indigenous areas: Case Colombian 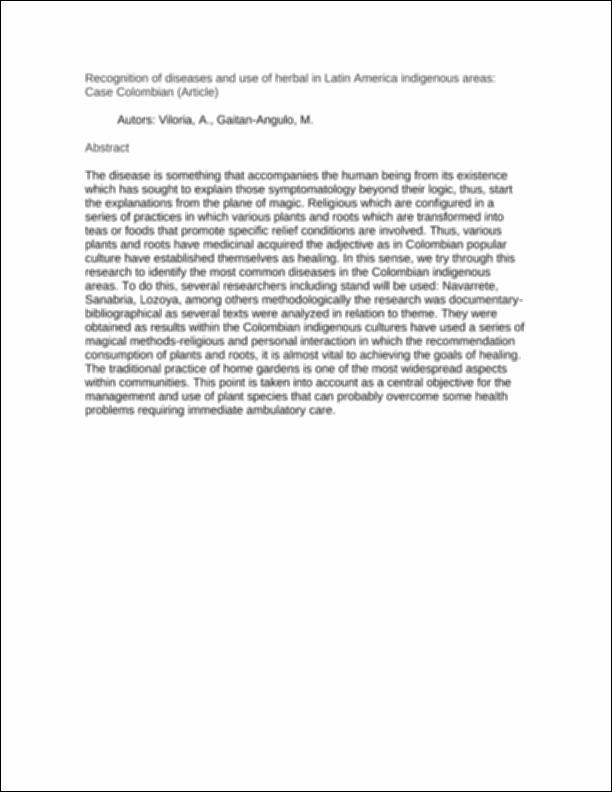 Recognition of diseases and use of herbal in Latin America.pdf (8.542Kb)
Author

The disease is something that accompanies the human being from its existence which has sought to explain those symptomatology beyond their logic, thus, start the explanations from the plane of magic. Religious which are configured in a series of practices in which various plants and roots which are transformed into teas or foods that promote specific relief conditions are involved. Thus, various plants and roots have medicinal acquired the adjective as in Colombian popular culture have established themselves as healing. In this sense, we try through this research to identify the most common diseases in the Colombian indigenous areas. To do this, several researchers including stand will be used: Navarrete, Sanabria, Lozoya, among others methodologically the research was documentary-bibliographical as several texts were analyzed in relation to theme. They were obtained as results within the Colombian indigenous cultures have used a series of magical methods-religious and personal interaction in which the recommendation consumption of plants and roots, it is almost vital to achieving the goals of healing. The traditional practice of home gardens is one of the most widespread aspects within communities. This point is taken into account as a central objective for the management and use of plant species that can probably overcome some health problems requiring immediate ambulatory care.
Collections