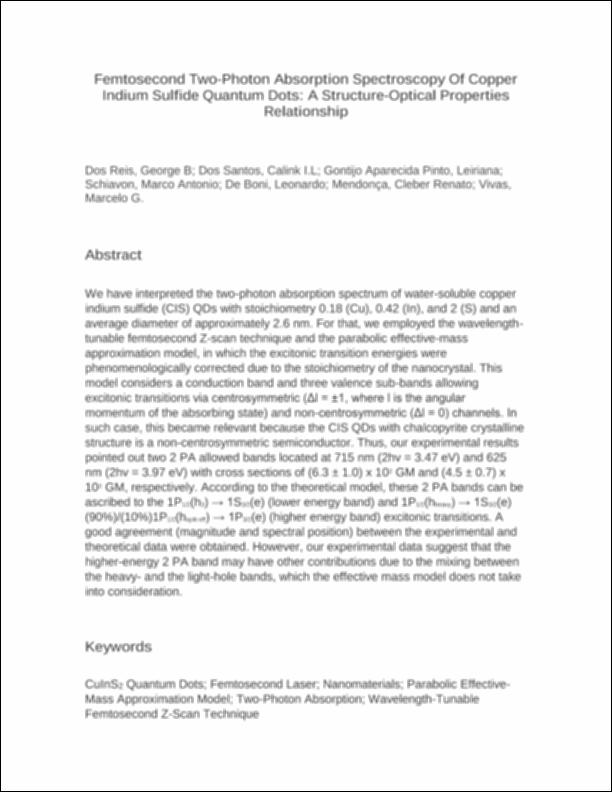 We have interpreted the two-photon absorption spectrum of water-soluble copper indium sulfide (CIS) QDs with stoichiometry 0.18 (Cu), 0.42 (In), and 2 (S) and an average diameter of approximately 2.6 nm. For that, we employed the wavelength-tunable femtosecond Z-scan technique and the parabolic effective-mass approximation model, in which the excitonic transition energies were phenomenologically corrected due to the stoichiometry of the nanocrystal. This model considers a conduction band and three valence sub-bands allowing excitonic transitions via centrosymmetric (Δl = ±1, where l is the angular momentum of the absorbing state) and non-centrosymmetric (Δl = 0) channels. In such case, this became relevant because the CIS QDs with chalcopyrite crystalline structure is a non-centrosymmetric semiconductor. Thus, our experimental results pointed out two 2 PA allowed bands located at 715 nm (2hv = 3.47 eV) and 625 nm (2hv = 3.97 eV) with cross sections of (6.3 ± 1.0) x 102 GM and (4.5 ± 0.7) x 102 GM, respectively. According to the theoretical model, these 2 PA bands can be ascribed to the 1P1/2(h3) → 1S3/2(e) (lower energy band) and 1P1/2(hheavy) → 1S3/2(e) (90%)/(10%)1P1/2(hsplit-off) → 1P3/2(e) (higher energy band) excitonic transitions. A good agreement (magnitude and spectral position) between the experimental and theoretical data were obtained. However, our experimental data suggest that the higher-energy 2 PA band may have other contributions due to the mixing between the heavy- and the light-hole bands, which the effective mass model does not take into consideration.
Collections