Effects of scandium composition on the structural, electronic, and thermodynamic properties of SCxY1-x metallic alloys 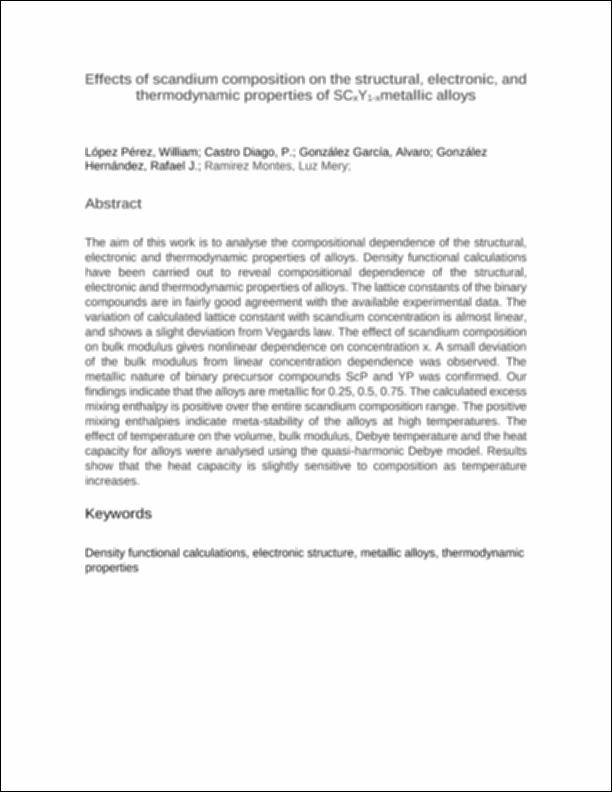 Effects of scandium composition on the structural (143.0Kb)
Author

The aim of this work is to analyse the compositional dependence of the structural, electronic and thermodynamic properties of alloys. Density functional calculations have been carried out to reveal compositional dependence of the structural, electronic and thermodynamic properties of alloys. The lattice constants of the binary compounds are in fairly good agreement with the available experimental data. The variation of calculated lattice constant with scandium concentration is almost linear, and shows a slight deviation from Vegards law. The effect of scandium composition on bulk modulus gives nonlinear dependence on concentration x. A small deviation of the bulk modulus from linear concentration dependence was observed. The metallic nature of binary precursor compounds ScP and YP was confirmed. Our findings indicate that the alloys are metallic for 0.25, 0.5, 0.75. The calculated excess mixing enthalpy is positive over the entire scandium composition range. The positive mixing enthalpies indicate meta-stability of the alloys at high temperatures. The effect of temperature on the volume, bulk modulus, Debye temperature and the heat capacity for alloys were analysed using the quasi-harmonic Debye model. Results show that the heat capacity is slightly sensitive to composition as temperature increases.
Collections